How documentation works in VTEX IO

Documentation in VTEX IO is built with the mindset that developers should have it at hand, in order to encourage its scaling and maintenance. Therefore, what that means is that all VTEX IO Docs content is dynamically rendered from the code of each and every app in VTEX IO's registry, using the Docs Builder.

The Docs Builder is a VTEX IO builder that access the /docs folder contained in the app's code, reading its markdown content and rendering it as a page in VTEX IO Docs.

Take for instance the product-identifier app. Looking at the app's content structure, it's possible to see a /docs folder with a README.md .

That will render a page in VTEX IO Docs with a custom URL that makes reference to the app:

The page created is as follows:

To be able to use the Docs Builder, you need to go through some quick steps: 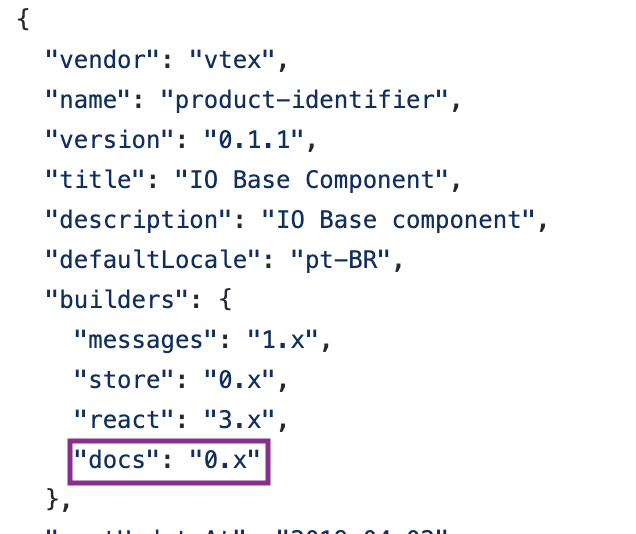 DISCLAIMER: in order to not have to keep track of two README.md files (one in the project’s root and another it the docs/ folder), you can delete the former and only keep the latter. GitHub will read the one from the docs/ folder and render it on the landing page.

How to create multipage documentation

Docs builder will create complex pages with navigation handling and multipage content as well. To be able to accomplish this, you need to:

This will render a page with a sidebar that follows your summary implementation and also renders your multipage documentation. This very app (vtex.io-documentation) was created from this blueprint.

Contribution is easy and open-source in VTEX IO

Apps are, at their core, bits of programming code and are therefore stored in git repositories. Docs Builder enables documentation contribution on a Pull Request/Merge Request level.

VTEX Open Source native apps and documentation are fully stored in the VTEX Apps Organization on GitHub, meaning that the documentation, as well as the code are open-source and may be contributed to by creating new Pull Requests.

It wouldn't mean much if a tool for bringing documentation closer to the developer was created but no effort was pursued in creating the awareness of always keeping that documentation up-to-date.

As a result, VTEX Apps Organization has the Docs Bot constantly monitoring the documentation status. Its responsibilities are:

Docs Bot is an open-source project and may be used by any third-party repo/organization with just a few tweaks. Also, contributions to it are encouraged to make it even more powerful.